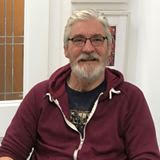 Prior to that, he had a forty-five year career in the world of underwater, happiness, awe exploration, science, engineering and the oil and gas industry. During his tenure in the latter, he played a small part in the destruction of this beautiful planet, and he is feeling horribly guilty about that.

Contradictorily, he has always been a noisy advocate on behalf of all of nature, especially those creatures who inhabit the oceans, where he routinely witnessed the wonder of them, as a perk of his job.

He has a keen interest in psychology, psychiatry, anthropology and psychological
anthropology.

He has a higher diploma in human psychology and a diploma in drug and substance abuse counselling.

Throughout his life he has written, and kept diaries which are full of stories from the far-flung places that he has worked.

His short stories are written from experience, and he likes to think that the sense of humour in his cartoons, come from there also.

In 1977 he qualified as a finished artist and a copywriter for the advertising industry, in
which he never worked. However that love of art and words stayed with him throughout his life, and now that he has nothing but time on his hands, and one reasonably good hand, the left one, which he has forced to behave somewhat like his right used to. He indulges himself drawing and writing.

A short story of his, has been printed in a regional newspaper, the Tipperary Star, and it is due for publication in the annual edition of a weekly, national magazine, Ireland’s Own on 10 September https://www.irelandsown.ie/

Ireland’s own have also undertaken to publish another short story in their weekly magazine; however a date has not been set as yet.

Three of his original cartoons were published in the September October edition of the online literary review Spadina http://spadinaliteraryreview.com/ in Toronto Canada and they have undertaken to publish a short story and three more original cartoons in their next edition, February / March

He is married with three children and  lives in Dublin Ireland with his family and their two dogs, bearded lizard, snake, tail- less whip scorpion (at least) three cats, a tortoise and many hundreds (perhaps thousands) of ants.